View All
Rakhi 2020 is on 3rd August. Send rakhi, lumba, puja thali & many more rakhi gifts to your brother in India

The term 'Navratri' means nine nights. During these nine nights and ten days, different divine forms of Mother Goddess, regarded as the Shakti or Devi, are worshiped, all through out

Navratri is one of the important festivals of India. This festival is celebrated with lots of joy and enthusiasm by every Indian. The literary meaning of Navratri means nine nights. During these nine nights and  ten days, nine divine forms of Devi are worshiped. So on this special festival, GiftstoIndia24x7.com showcases wide plethora of gift articles that you can send to your dear ones. The “Navratri Gifts to India” sections includes diverse types of gift articles. You can make the festival more auspicious by sending attractive spiritual git articles such as holy idols, puja accessories, shagun coins etc to yo

India is a land of varying culture and rich heritage and festivals in India uphold the religious zeal of the people. Navratri is one of the most important festivals of India having immense religious significance. The term "Navaratri" means nine nights ("Nava" meaning Nine and "Ratri" meaning night). During these nine nights and ten days, different divine forms of Mother Goddess, regarded as the Shakti or Devi, is worshiped, all through out the country. Navratri is celebrated in different regions of the country with a lot of pep and vigor. In Western India, particularly in the state of Gujarat, Navratri is celebrated with the fa

India is a diverse land, socially and culturally. But the energetic and enthusiastic spirit invested in every celebration from every nook and corner unites this vast country. One of the most celebrated occasions that are observed across the length and breadth of India is Navratri. It has various interpretations in the different parts of the country and separate traditions involved, but the festivity is grand in most parts of the country. This diversity apart from giving birth to numerous traditions, rituals and, practices has also put a number of unique and lip-smacking dishes to every Indian’s dining table. Come, let's t

Convey Wishes on Navratri with Some Alluring Gifts

Just like any other Hindu festival, Navratri also revolves round the annual seasonal changes. Celebrating this auspicious occasion is just an outlet to commemorate the fertility of Mother Nature. When translated to English, Navratri means 'nine nights'. As this is a festival of dancing and worship, the performance of Dandiya and Garba Rass is a very common phenomenon among all. The festival starts on the first day of the Hindu calendar month of Ashwin and is extended up to nine days, culminating into Dussera, i.e., the tenth day. Come this September, the whole of India will celebrate the upcoming festival of Navratri with great 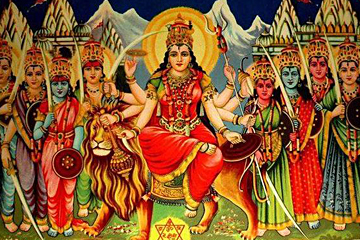 Customs and Traditions of Navratri

Navratri, as the name suggests, is the festival that is celebrated within a span of 9 nights. Dedicated to the deity Shakti, this festival is celebrated by either fasting for the whole of the 9 days or going for a vegetarian diet. The festival culminates in the celebration of the nine forms of Goddess Shakti. It is a custom in India to give gifts on every festival and Navratri is no exception. So, if you are away from India for the first time, then do search for some good Navratri gifts to India. Thus it can be easily seen that the festival dates are just around the corner. Preparations have already begun for this and all the 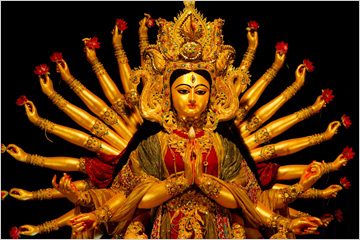 Navratri and Durga Puja: The Victory of Good over Evil

India is a land of festivals with diverse cultures, religions and languages united solely by their desire to stay as one. Among the many Hindu festivals that are celebrated here, the worship of the supreme holy Goddess or Shakti, the divine creative energy, is the main one. The Goddess is celebrated in two forms. In the western and northern parts of India, She is mainly celebrated as Goddess Amba or Durga and the festival concerning Her is called Navratri. The eastern region consisting of West Bengal, Odisha, Assam and Tripura worship the holy mother as Goddess Durga and celebrate Durga Puja. Navratri Navratri literally means

Navratri is the festival of nine nights. Though the festival has its roots in the north-western parts of the country, today Navratri is celebrated all throughout India. With growing presence of the Indians all over the globe, festivals like that of Navratri is no more confined within the geographical boundaries of India. Just like any other festive occasion in India, Navratri also scripts a thanksgiving ceremony to the annual seasonal changes in the expectation of bountiful of food crops. In the month of Ashwin of Hindu calendar is when Navratri is celebrated with great fervour and zeal. The festival of Navaratri is associated

When literally translated from Sanskrit, Navratri means nine nights. Navratri in India is one of the most auspicious festival, celebrated with vim and brio. This festival begins on the first day of the Hindu month of Ashwin, and culminates in the ninth day, preceding Dussera. This period of nine nights is a period of dancing and worship, and scripts a moment of jubilation among the Indians by and large. Performing Dandiya and Garba Rass are the major highlights of the festival. Just like any other Hindu festival, Navratri also is influenced by seasonal changes and is associated with the fertility of Mother Earth. Come this