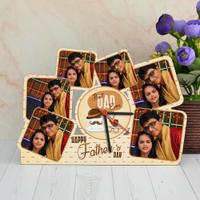 1. Upload the image on the product preview page or after making the payment on the order confirmation page.

2. Send only high resolution image taken by at least 5 megapixel camera for clear image on the photo frame.

How to Select Gifts for an Indian Father?

India is a diverse country. People here come from different geographical regions. They have different cultures, speak separate languages, and practice many religions. This reflects directly on their attitude and personality. But even with all these differences, there is one thing common across the length and breadth of India - the value of family. Family plays an extremely important role in the lives of most Indians and the man who holds it all together is a father. Best ways to choose a gift A father plays an active and anchoring role in our lives. He toils tirelessly to bring a smile to our face. We are extremely special to h

How To Send Gifts To Dad From The US To India

Gifts are something which speak a million words when exchanged between close people. For anyone, their father is one of the most special persons on this planet. Gifting him something momentous means a lot as it will definitely be close to his heart no matter what it is. There are a lot of occasions when you wish to be by his side. But this may not always be possible especially when you are staying abroad. The least you can do is send him a meaningful gift to India which will somewhat make up for your absence. Occasions To Gift There are a lot of occasions around the year which are ideal to send gifts to your dad in India from t

One of the most special people in your life is your father. He is the person who has been in your life since your birth and has supported you throughout. His love is spontaneous and never-ending. Father is one word which comes without an asterisk. The very little we can do for him is to send him a lovely gift which he has always wanted but never quite got to buying. On the momentous occasion of his birthday, take a look at some of the best gifting options for him that you can send to India. Customised Mugs Customised mugs with quirky quotes make for an awesome gift. It will make your father feel special when a unique mug sit

Image Credit : Zee News Although not a public holiday in most countries around the world, including India, Father’s Day holds a special place in the hearts of every child. Irrespective of age, every child wishes to make the day memorable for their father. Fathers go through a lot to put a smile on their children’s face without a single complaint. Father's Day presents an opportunity to do something great for him. This is why everyone looks forward to celebrating Father’s Day. Since the Middle Ages, Father’s Day was celebrated under the name of St. Joseph’s Day on March 19th. This practice changed i

Image Credit : Haper Macleod LLP Father’s Day is not just a day of honouring one’s father. It is also a day to honour all the sacrifices he makes and all the hardships that he goes through only to put a smile on his children’s face. Although deep-seated in Christianity, Father’s Day has become a trans-religion celebration. Everyone makes an effort to honour their father to the best of their ability. Celebrated as a Catholic holiday since the Middle Ages as Saint Joseph’s Day on March 19th, Father’s Day took shape as we know it in 1910. In America, Father's Day was founded by Sonora Smart Dodd