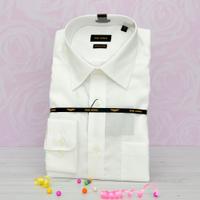 White is a color of elegance. This White shirt by Park Avenue will add extra charm on the personality of those who will wear it. The shirt is designed in a fabric that will give full comfort to those wearing it. Send this as a gift to your near and dear ones in India.

Service and Collection of Gifts is Very Good

Really liked the various range of gifts offered. Especially liked the midnight delivery for a great surprise. Would definitely recommend to others for sending gifts to India for various occasions.

Sai Pasupulety from Alpharetta, USA who used our services to send gifts to Hyderabad.

Articles On For Brother

Top 5 gift items for Akshaya Tritiya - The Day of Prosperity

Akshaya Tritiya is a holy day for Hindus and Jains. It falls on the third tithi of the Shukla Paksha of the pan Indian month of Vaishakha. It is considered an auspicious day because of the birthday of Lord Parasurama, the sixth incarnation of Lord Vishnu. This day is believed to bring good luck and prosperity and an auspicious day to start new ventures. Goddess Lakshmi and Lord Ganesha are worshipped on this day and gold and silver jewellery are purchased. To mark the observances, gifts are exchanged amongst loved ones. Some of the top Akshaya Tritiya gifts to India are as discussed below. Silver Gifts : On this day people b

Apparels as Rakhi Gifts for Brother

Spread love, express your care and affection by sending gifts to your brothers on Rakhi, which will be observed on August this year. Send rakhi to India and convey your heartfelt wishes from abroad. Make this year’s Raksha Bandhan all the more special by presenting lovely, dashing outfits to your brothers as rakhi gifts to India, along with decorative rakhis. Gift your brothers the amazing and elegant range of apparels this Rakhi. The festival being a special occasion dedicated to the celebration of love and bonding between brothers and sisters, is widely celebrated in India with great enthusiasm. If one is away from Indi