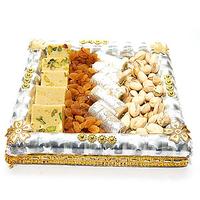 Presenting a unique hamper to send for your dear ones on any day of festivity. 200 gm Kaju Pista Roll, 200 gm Mawa Pista Barfi, teamed with 100 gm pistachios and 100 gm raisins is a nice as well as enticing gift idea to send to India to enjoy any festive event.

This palatable conglomeration of sweets and dry fruits are sure to lure their taste buds a lot. The decorative display of this tray is also sure to adhere to the happy colors of a festive moment to the best.

So, hurry now! Select and send this exclusive sweet delight to your near and dear ones in India and dance in tune with the variegated hues of the day to your very best.


The color, design, and size of the tray as has been shown in this picture may vary depending upon its availability.

Krishnakali Dutta from Atlanta, United States of America who used our services to send gifts to Kolkata.

Image Credit : deccanchronicle India is a land of varied cultures and religious festivities. And it is through this united celebration of any festival that the country marks its true identity as an 'unity in diversity'. Come this second day of September and the whole of India will perform the festival of Janmastami. Krishna Janmaashtami is a Hindu festival celebrating the birth of Lord Krishna, a mortal incarnation of the Hindu God, Vishnu. This auspicious day falls annually on the eighth day of waning moon in the Hindu month of Shravana. Being one of the most popular Hindu deities, Lord Krishna's birth celebration has a havoc

The festival of Karwa Chauth is a very popular one that is celebrated mostly in the northern part of India. The popularity of this festival has spread a lot and hence it is now celebrated all around the world. The rituals of this festival originated from the time of the Mughal invasion and thus it has a rich cultural heritage. The word ‘karwa’ means ‘pot’ whereas the term ‘chauth’ refers to the ‘fourth’ day of a particular period. Thus, Karwa Chauth falls on the fourth day of krishna paksha in the month of Kartik according to the Hindu calendar. So if you are wondering as to when

Image Credit : educationafter12th Teachers play a pivotal role in shaping a society's future as a whole. They guide us through the murky chasms of ignorance and disbelief towards the illuminated path of knowledge and wisdom. With their invaluable contribution in the society, teachers truly appear as a foundation stone of all developments. To acknowledge this highly lofted vocation, the whole world comes together hand in hand to celebrate a day exclusively dedicated to teachers. Though, since 1994, the World Teachers' Day is held annually on October the 5th, every country has a separate day to commemorate this august occasion. T

Image Credit : edutopia Teachers are the significant part of everyones life and society. Hence to honor them in a special way, Teachers Day is celebrated all over the world. In India, Teachers’ Day is observed as a mark of tribute to the contribution of the teachers to the society. In the commemoration of the birthday of Dr. Sarvepalli Radhakrishnan, who believed in spread of education, a reputed diplomat, a great scholar, President of India and most importantly, a teacher. After he became the President of India in 1962, his birthday start to commemorate as Teachers’ Day. It is observed in almost all countries, thou