Why use us to send Gifts to Sivaganga

No. of gifts delivered in Sivaganga - 3
Delivery Options for Sivaganga 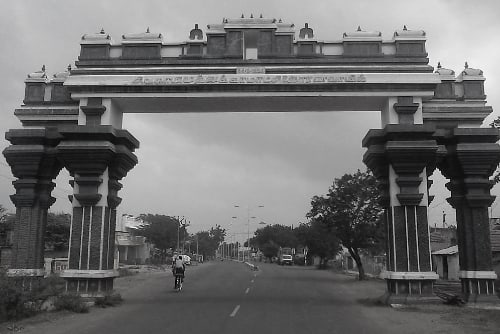 Sivaganga is a town in the Sivaganga district in the South Indian state of Tamil Nadu. It is also the headquarters of the Sivaganga District. The town is located at a distance of 48 km (30 mi) from Madurai and 449 km (279 mi) from the state capital Chennai. It is an important town in this district for official and commercial purpose. Its nick named as Sivagangai Seemai ( சிவகங்கை சீமை ) .

Sivaganga kingdom was founded by Sasivarna Periya Oodaya Thevar in 1730. The town was subsequently ruled by his successors and ultimately by Velu Nachiyar under the stewardship of Maruthu Pandiyar. They were against the British Empire, but ultimately lost to them in 1790. The Company appointed Gowry Vallaba Periya Oodaya Thevar as the Zamindar of Sivaganga in 1801, whose successors continued with chaos until India's independence in 1947. It was under Ramnad district until 1984 and subsequently a part of the newly formed Sivaganga district. The town is known for agriculture, metal working and weaving. The region around Sivaganga has considerable mineral deposits.