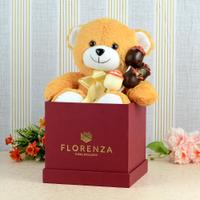 A teddy is one of the most adorable gift options one can give to his or her dear ones. When that soft toy is paired with succulent chocolates shaped as beautiful roses, the happiness quotient of the receiver no doubt gets doubled. Send this amazing hamper comprising one Brown fluffy teddy with four rose shaped delectable chocolates in a Maroon Florenza box to your friends and family members whom you find adorable in India. Spread joy and let that special one in India brim with happiness.

Image Credit : gozocabs Bihu, the most important festival of Assam is a carnival of social integration. People of all demographics participate in the festival indiscriminate of any class divides.The agrarian community is predominant in this region. Naturally, Bihu and its festivities are deeply rooted in agricultural activities and the changing mood of nature. The Bihu festivals of Brahmaputra valley not only remind her people of the tradition of Assam but also tell the story of man, built on the edifice of agricultural and pastoral life. The people of Assam celebrate three Bihu festivals in a year. “Rongali Bihu” o

Image Credit : ybijoysingh Bihu is an important cultural festival of Assam. People of Assam, irrespective of caste, religion, creed and faith celebrate this festival with lots of fun and folic. Assam celebrates three types of Bihu in a year. The one celebrated in mid of April is known as 'Rongali Bihu' or 'Bohag Bihu'. Thus if you want know when is Bihu in 2012, it is on 14th April. Amongst the three Bihu festivals, 'Bohag Bihu' is the important and colorful one. This festival marks the onset of the agricultural season. The word 'Bihu' has been derived from the word 'Bishu' of Dimasa kachari language. Dimasa kachari is a tribe

When was Independence Day 2019?

India’s struggle for Independence began prominently from the year 1857, with the Indian Sepoy Mutiny. Later on, in the 20th century, eminent political and social leaders launched a few nationwide movements under the leadership of Mahatma Gandhi. These movements gained strength and the colonial powers lost to the Indian uprising on August 15th, 1947. On this day people mainly pay tribute and homage to the leaders who have fought for India’s Independence. To make this day even more celebrated, many government buildings are lit up with the colors of our national flag. The President of India hoists our national flag wit

Send chocolates and gifts to impress your younger sister this Rakhi

Are you missing your younger sister on Rakhi? Then you can delight her by sending attractive gifts. Since accessing Internet has become very easy, you can send gifts online. So instead of going to the market, you can shop in this online stores. Amongst various online stores, We are a mega e-gifting store from where you can send Rakhi to India . In this store you will get gifts only for the festival of “Raksha Bandhan”. Its efficient and reliable customer support and delivery service will definitely help you in placing as well as delivering the Rakhi to India along with gifts, respectively.   Here,

Image Credit : sunflourbakingcompany Boss’s Day or also known as National Boss Day is an occasion commonly celebrated in a growing number of countries like the United States, Canada and Romania. These days it is also celebrated widely in India. This day was created in order to increase the bond between employees and employers. Employees get to show their appreciation to their bosses or supervisors that generally are well deserved. There are times employees do not understand the hard work and dedication that their superiors put in and the challenges they face on a daily basis. Boss’s Day is a great opportunity to app