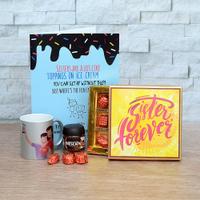 Send your affection to your sister with this sister chocolate-coffee hamper. This delightful combo includes a personalized greeting card, a grey coffee mug, 25 gms of Nescafe coffee and 9 pieces handmade chocolates. The greeting card and the coffee mug, are beautifully designed with a message printed on each of them.

One of the most special festivals of India is Rakhi, also known as “Raksha Bandhan”. This unique festival celebrates the eternal bond of love and affection between brother and sister. The preparation for Rakhi begins days before. On this auspicious day, all close ones assemble together and celebrate the day grandly. However, now a days due to professional commitments many individuals have to reside far away from their loved ones. They miss the opportunity to celebrate such grand festival with their dear ones. If you are in such a situation, you can make your dear ones make your presence felt by sending gifts. Inste

Raksha Bandhan, commonly known as Rakhi is the most awaited festival by Indians all over the world. It is a day, dedicated to celebrate the scared bond between brothers and sisters. On this auspicious day, sisters tie a ‘Rakhi’ on their brothers wrist and pray for their well-being. Brothers, in turn, vow to protect them. If you are wondering when is Rakhi celebrated then here is some information which may help you. As per the Hindu lunisolar calendar, it falls on the full moon day of the Shravan month. But, there are several individuals who live miles away from their families due to professional responsibilities. If

The festival of Rakhi has been celebrated over the ages from time unknown. There is reference of this divine occasion in the longest epic, The Mahabharata. Once Yudhisthira, the eldest of the Pancha Pandavas asked Lord Shri Krishna about ways to ward off the impending evils. To his query, the Lord replied that the best option for him would be to observe the Rakshaa Ceremony. This is one of the earliest references to Rakhi. Another reference is traced in documented history about Alexander's wife tying a Rakhi on the hand of Porus to ensure the safety of her husband in the battle field. Porus, a true Kshatriya (warrior class) lis

Rakhi is the most awaited festival of Indians throughout the world. Rakhi is also known as “Raksha Bandhan” that commemorates the loving bond between brother and sister. On this auspicious day, sister ties a rakhi on her brother’s wrist. Both pray for each other’s well being and happiness. On this very day, apart from having delicious sweets and chocolates, brothers and sisters exchange exotic gift articles. All the family members come together to make the celebrations splendid. Now a days, there is change in the scenario. Often due to career aspirations people have to settle in foreign lands. As a resul