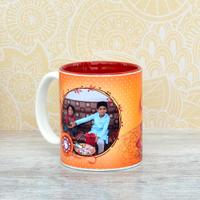 This attractive red raksha bandhan mug from Giftstoindia24x7.com can be easily sent for your siblings in India as Gifts to India. The mug is a personalized one and it is white in colour with a red inner wall and yellow body depicting rakhi gifts.

1. Upload the image on the product preview page or after making the payment on the order confirmation page. 2. Send only high resolution image taken by at least 5 megapixel camera for clear image on the mug.

Rakhi happens to be the most sweetest festival that honours the bond between a brother and a sister. There are different festivals that celebrate various relationships between people like Mother’s Day, Father’s Day, Grandparent’s Day etc. Impact of western culture has popularized these occasions in India. Just like in Western countries, these occasions are also celebrated in India. But Rakhi is one festival that is totally an Indian festival. No other festival such as this focusses importantly on the relationship between a brother and a sister. Here according to tradition there exists a ritual of rakhi tying c

Raksha Bandhan is an important festival of India. The festival is celebrated with fun and frolic by the siblings. The festival centers around tying of Rakhi thread by sister on her brother’s wrist. As the festival approaches, siblings starts buy attractive Rakhis and gifts for their dear ones. On the day of the festival, both brother and sister adore themselves in new apparels and perform the Rakhi ceremony. After sister ties the Rakhi thread on her brother’s wrist, the latter blesses her and promises to be with her throughout his life. The festival is generally celebrated in the month of August every year. If you w