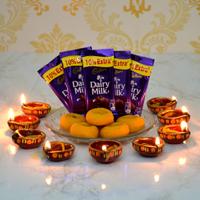 Get this delicious sweet of 100gm Peda along with 5 Dairy Milk chocolates and 10 diyas on this Diwali.

Note:- Plate is not part of the hamper

I have been sending gifts to India since long using this portal and the experience has been satisfactory. I highly recommended everyone go ahead and order with confidence. Thanks! Have a blessed holidays!

Mohinder Singh from Rochester, USA who used our services to send gifts to Ludhiana.

Send Gifts to India to Your Family on Diwali

Festivals are celebrated by Indians with great pomp and show but nothing is compared to the grand and majestic celebration of Diwali, the ‘Festival of Lights’. This is one of the most popular festivals of India where every Indian, irrespective of caste and creed, take an active part. On this day, people light up their homes with earthen diyas and also decorate their entire household with marigold flowers. Beside these, wearing new clothes, eating delicious food, bursting crackers, meeting up with family and friends along with exchanging gifts are all significant parts of this joyous festival. In current times, ther