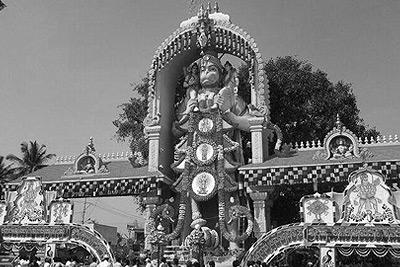 Tumkur (officially renamed as Tumakuru) is one of the industrial cities located in the state of Karnataka, also known as Shaikshanika Nagari (city of education) and Kalpatharu Nadu (land of coconut trees). Since 28 August 2010, Tumkur has been accorded the status of a City Corporation. It is situated at a distance of 70 km (43 mi) northwest of Bangalore, along National Highway NH-4 and NH-206. It is the headquarters of the Tumkur district. Tumkur hosts India's first mega food park, a project of the ministry of food processing. The India Food Park was inaugurated by Prime Minister Narendra Modi in September 2014. Etymologically, the name of the city is believed to have been mutated possibly from "Tumbe ooru" because of the abundance of tumbe huuvu, a kind of flower, or tamate ooru because of the folk musical percussion instrument tamate, that might have been used most here. Also, it is called the coconut city.
Source : Wikipedia