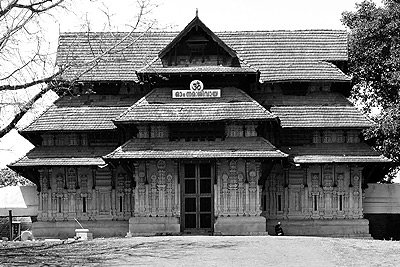 Thrissur is the fourth largest city, the third largest urban mass in Kerala and the 20th largest in India. The city is built around a 65-acre hillock called the Thekkinkadu Maidan which centers the Vadakkumnathan temple. Thrissur is also known as the Cultural Capital of Kerala because of its cultural, spiritual and religious leanings throughout history. It contains the Kerala Sangeetha Nadaka Academy, Kerala Lalithakala Akademi and Kerala Sahitya Academy. The city organises the Thrissur Pooram festival, the most spectacular and vibrant temple festival in Kerala. It has a large number of well known temples including the Vadakkumnathan temple, Thiruvambadi Sri Krishna Temple and Paramekkavu temple and Guruvayur temple. Thrissur is home to many leading Malayali entrepreneurs and is a major financial and commercial hub of Kerala.