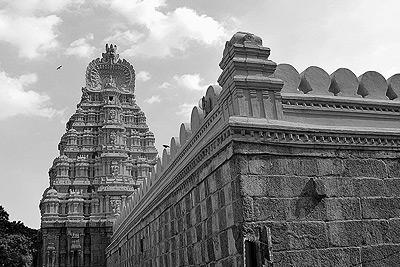 Srirangapatna (also spelled Shrirangapattana; anglicized to Seringapatam during the British Raj) is a town of Mandya district in the Indian State of Karnataka. Located near the city of Mysore, it is of religious, cultural and historic importance. The monuments on the island town of Srirangapatna has been nominated as a UNESCO World Heritage Site, and its application is pending on the tentative list of UNESCO. Although situated a mere 15 km from Mysore city, Srirangapatna lies in the neighbouring district of Mandya. The entire town is enclosed by the river Kaveri to form a river island, northern half of which is shown in the adjacent image. While the main river flows on the eastern side of the island, the Paschima Vaahini segment of the same river flows to its west. The town is easily accessible by train from Bangalore and Mysore and is also well-connected by road, lying as it does just off the Bangalore-Mysore highway. The highway passes through this town and special care was taken to minimize any impact on the monuments.
Source : Wikipedia