Why use us to send Gifts to Solapur

No. of gifts delivered in Solapur - 305
Delivery Options for Solapur 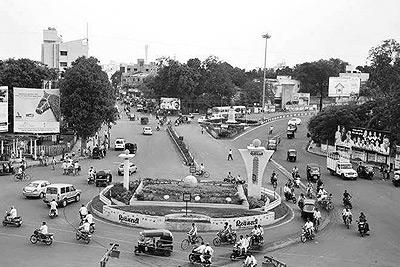 Solapur is a city located in the south-western region of the Indian state of Maharashtra. Solapur is located on major Highway, rail routes between Mumbai,Pune, Bangalore and Hyderabad, with a branch line to the cities of Bijapur and Gadag in the neighbouring state of Karnataka.& Solapur Is well connected through Airlines way.& Also Solapur international Airport is under construction. It is classified as a 1 Tier and B-1class city by House Rent Allowance (HRA) classification by the Government of India. It is the 5th biggest city in Maharashtra and the 49th most populous city in India and 43rd largest urban agglomeration.

The Solapur District was ruled by various dynasties such as Andhrabhratyas, Chalukyas, Rashtrakutas, Yadavas and Bahamanis. 'Solapur' is believed to be derived from the combination of two words: Sola in Marathi means "sixteen" and "Pura" means "village".The present city of Solapur was considered to be spread over sixteen villages viz. Aadilpur, Ahmedpur, Chapaldev, Fatehpur, Jamdarwadi, Kalajapur, Khadarpur, Khandervkiwadi, Muhammadpur, Ranapur, Sandalpur, Shaikpur, Solapur, Sonallagi, Sonapur and Vaidakwadi and all these villages are now merged with Solapur Municipal Corporation.
Source : Wikipedia

These PIN Codes are those where we can arrange delivery in Solapur .
"HD" represents "Hand Delivery". For these PIN codes, delivery will be done by hand on the date you choose.
"CD" refers to "Courier Delivery". For these PIN codes, the gifts will be shipped through our shipping partners & will be delivered during the range of dates selected by you.