Why use us to send Gifts to Ludhiana

No. of gifts delivered in Ludhiana - 6751
Delivery Options for Ludhiana 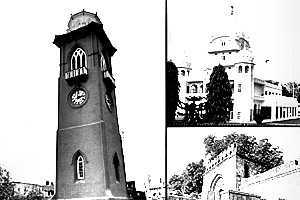 Ludhiana is a city and a municipal corporation in Ludhiana district in the Indian state of Punjab and is the largest city, north of New Delhi. It is the largest city in the state, with an estimated population of 3,487,882 as per Census 2011. The population increases substantially during the harvesting season due to the migration of labourers from the eastern states of Uttar Pradesh, Bihar, Odisha and Delhi. It has an area of about 310 km². The city stands on the Sutlej River's old bank, 13 km south of its present course. It is a major industrial centre of northern India and was referred to as India's Manchester by the BBC. Ludhiana is located 98 kilometres west of the state capital Chandigarh on NH 95 and is centrally located on National Highway 1, which runs from the Indian capital New Delhi to Amritsar.

Gifts you can Send to Ludhiana

On our website GiftstoIndia24x7.com you will find many gifts that you can send to your family and friends in Ludhiana. We have in store many gifts like Cakes, Flowers, Soft Toys, Personalised Gifts and many more. Send these exclusive gifts to your loved ones, surprise them and make the most of every occasion. We will deliver the gifts exactly on time and put a smile on your loved one’s face.

How can I send Personalised Gifts to Ludhiana?

How to Send Gifts at Midnight to Ludhiana?

Do you plan to surprise your loved at 12 o’clock midnight than you have come to the right place as GiftstoIndia24x7.com delivers gifts to your loved ones in Ludhiana at midnight. GiftstoIndia24x7.com brings to you varied collection of gifts that you can send to your friends and family in Delhi even at midnight. We will deliver the gifts exactly at 12 o’clock midnight and surprise your special person. The gifts will be the same that you have ordered as we believe in giving the best online gifting experience to our customers.

Gifts are like sweet treats that everyone craves for. So no matter what the occasion is gifts make them eventful and cherishable.
So if you are looking forward to sending presents you can purchase it from our website. The midnight delivery service might just add more sweetness and pleasure to the celebrations. You can purchase several attractive and delectable products from our website and we shall get it delivered to your loved ones in Ludhiana. So the next time you plan to place an order for surprising your close ones, you might consider browsing our site, GiftstoIndia24x7.com for some attractive items.

Begin the midnight celebrations with midnight cakes from GiftstoIndia24x7.com. With a wide array of curated savories like varied flavored cakes, we not only provide you with the option to choose from them but also have it delivered at the stroke of midnight. In case you happen to stay away from your loved ones, with us by your side now you can help your dear ones create some happy memories with the midnight cakes and celebrations on their special occasions.