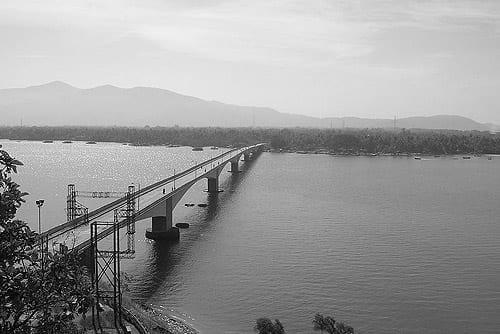 <p>Karwar (formerly Carwar) is a city in Uttara Kannada district in the Indian state of Karnataka and the administrative centre of Uttara Kannada district. Karwar lies on the west coast of Southern India at the mouth of the Kali river. Its geography creates a natural harbour with protection against monsoon weather. Being a port town, Karwar is a centre for agriculture, some manufacturing and tourism. It is situated between Sahyadri ever green forest in east, blue Arabian Sea to the west, towards south ends with harbour and North the Kali river. It is one of the green cities of India with eco tourism. Hills has created a natural harbour with protection against wind and sea tides naturally. Being a port town, Karwar is a centre for fish business, agriculture, known for manufacturing of golden ornaments in Karwarian style and under-developed tourism. It has a population of about 77139 . Karwar was part of the Bombay Presidency until 1956. Karwar is known as Kashmir of Karnataka by Rabindranath Tagore, Kuvempu and D. R. Bendre. Tagore wrote his first Drama on Karwar beach. Notable people include Rama Raghoba Rane, Former Chief Justice of India Justice D. G. Palekar and spiritual guru Shri Padmanabh Maharaj.
<br>
<br>Source :
<a href="https://en.wikipedia.org/wiki/Karwar" rel="noopener noreferrer" target="_blank">Wikipedia</a>
</p>