Why use us to send Gifts to Jodhpur

No. of gifts delivered in Jodhpur - 635
Delivery Options for Jodhpur 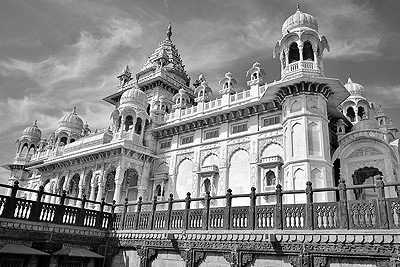 Jodhpur is the second largest city in the Indian state of Rajasthan and officially the second metropolitan city of the state. It was formerly the seat of a princely state of the same name. Jodhpur has historically been the capital of the kingdom known as Marwar, which is now part of Rajasthan. Jodhpur is a popular tourist destination, featuring many palaces, forts and temples, set in the stark landscape of the Thar Desert.

The old city circles the fort and is bounded by a wall with several gates. However, the city has expanded greatly outside the wall over the past several decades.

Jodhpur lies near the geographic centre of the Rajasthan state, which makes it a convenient base for travel in a region much frequented by tourists.

These PIN Codes are those where we can arrange delivery in Jodhpur .
"HD" represents "Hand Delivery". For these PIN codes, delivery will be done by hand on the date you choose.
"CD" refers to "Courier Delivery". For these PIN codes, the gifts will be shipped through our shipping partners & will be delivered during the range of dates selected by you.

GiftstoIndia24x7.com brings to you amazing gifts to be delivered in Jodhpur with same day delivery service which delivers gift within one day of placing an order. We bring to you a lot of gifts option like Flowers, Cakes, Chocolates, Sweets, Fruits and many more gift items, which are perfect to send to your dear ones and celebrate an occasion together. Our same day delivery will never disappoint you as we know what emotions are attached to your gifts and we want to convey it through your gifts.

I want to send gifts same day to Jodhpur. Is it possible ?

Jodhpur echoes culture, tradition and class. Leaving this beautiful city and its people can be extremely difficult.
Send your loved ones in Jodhpur a token of love on the same day with Giftstoindia24x7.com. The site lets you choose the best of gifts and also gets them delivered to your friends and family within 24 hours of placing your order with its same day delivery service.

Can flowers be delivered same day in Jodhpur?

Wish to send your loved ones some gorgeous flowers on their special occasion? If you consider sending a bunch of vibrant roses, lilies or gerberas, you can visit our website for some wide options. We have selected the freshest and the most aromatic of flowers for you to send your dear ones in Jodhpur in any kind of special occasions like birthdays, anniversaries, weddings.