Why use us to send Gifts to Ghaziabad

No. of gifts delivered in Ghaziabad - 3388
Delivery Options for Ghaziabad 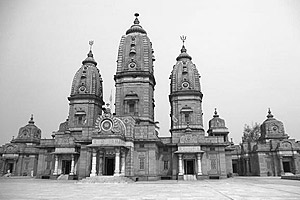 Ghaziabad is a city in the Indian state of Uttar Pradesh. It is sometimes referred to as the "Gateway of UP" because it is close to New Delhi, on the main route into Uttar Pradesh. It is a part of the National Capital Region of Delhi. It is the primary commercial, industrial and educational centre of western Uttar Pradesh and a major rail junction for North India. Recent construction works have led to the city being described by a City Mayors Foundation survey as the second fastest-growing in the world. It is a large and planned industrial city, with a population of 2,358,525. Cricket, association football, field hockey and Kabaddi are the main sports in Ghaziabad. Ghaziabad has also come up as a major educational hub with reputed schools and colleges in the region. Along with this there are many colleges as well which imparts graduation and post graduation education.

These PIN Codes are those where we can arrange delivery in Ghaziabad .
"HD" represents "Hand Delivery". For these PIN codes, delivery will be done by hand on the date you choose.
"CD" refers to "Courier Delivery". For these PIN codes, the gifts will be shipped through our shipping partners & will be delivered during the range of dates selected by you.

Gift Vouchers that can be Sent to Ghaziabad

Gift Vouchers are a perfect gift for your loved ones when you are not able to decide on a gift. You can send Gift Vouchers to your loved one in Ghaziabad. You can choose from different gift vouchers like Shopping, Dining, Apparel etc, of brands like shoppers stop, pizza hut, dominos and many more. Surprise your friends and family in Ghaziabad with Gift Vouchers from our website and put a smile on their face.

You can Send Gift Hampers to Ghaziabad

For special occasions of your loved ones you can send gift hampers to Ghaziabad.

Fresh Flowers & Cakes for your loved ones in Ghaziabad

Select the desired cake and flowers and the same will be delivered to your loved one in Ghaziabad. We have always been delivering fresh flowers and cakes to any part of India. Even if it is a midnight delivery we will deliver fresh flowers and cakes, as we do not compromise in the quality of the gift we deliver. We understand the emotion behind your gifts and so we deliver it with perfection and give you another reason to come back to us for any gifting solution.

Our online gifting website brings to you different gifts to send to your dear ones in Ghaziabad/Noida city with our same day delivery service which delivers your gift to them within one day of placing an order. Your family and friends will surely love this gift that you will send them from our website and with our on time delivery we will also give you the best online gifting experience.

Can flowers be delivered same day in Ghaziabad?

With us, now you can send your selected flowers to your loved ones in Ghaziabad within just 24 hours of placing the order from our site. The same day delivery option would help you send your loved ones your thoughtful greetings and warm wishes in no time. The diverse floral bouquets listed on our site would ensure your family and friends cherish your thoughtfulness and care despite your being away from them.