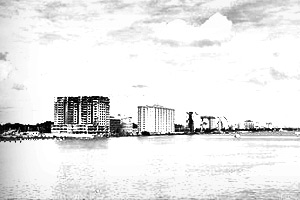 Ernakulam refers to the eastern, mainland portion of the twin cities of Ernakulam - Kochi in central Kerala, India. The city is the most urban part of Kochi and has lent its name to the Ernakulam district. Ernakulam is called the commercial capital of the state of Kerala.The Kerala High Court, the Office of the Corporation of Cochin and the Cochin Stock Exchange are situated here. In earlier days, Ernakulam was the headquarters of the Ernakulam District but was later shifted to Kakkanad. It is located 220 kilometres (137 mi) towards north-west of the state capital Thiruvananthapuram. This popular city was once referred to as the capital of the Kingdom of Cochin. It is considered as an important financial and commercial hub of Kerala.