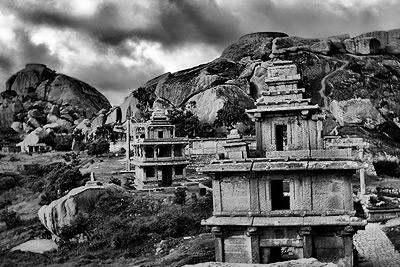 Chitradurga (also known locally as Durga) is a city and the headquarters of Chitradurga district which is located on the valley of the Vedavati river in the southern part of the Indian state of Karnataka. It is located about 200 km from the state capital Bengaluru. Chitradurga gets its name from Chitrakaldurga (or Picturesque castle), an umbrella-shaped lofty hill found here. Chitradurga was also known by the names Chitradurg, Chitrakaladurga, Chittaldurg. Chittaldrug (or Chitaldrug[2]) was the official name used during the British rule. Also known as Farkhabad during Tippu sultan rule. Chitradurga features bold rock hills and picturesque valleys, huge towering boulders in numerous shapes. It is known as the "stone fortress" (Kallina Kote). According to the epic Mahabharatha, its not confirmed about this story that a man-eating Rakshasa named Hidimba and his sister Hidimbi lived on the hill. Hidimba was a source of terror to everyone around while Hidimbi was a peace-loving rakshasa. When the Pandavas came with their mother Kunti in the course of their exile, Bhima had a duel with Hidimba in which Hidimba was killed. Thereafter Bhima married Hidimbi and they had a son named Ghatotkacha who had magical powers. Legend has it the boulders were part of the arsenal used during that duel. In fact, the boulders on which major part of the city rests belong to the oldest rock formation in the country.
Source : Wikipedia