Why use us to send Gifts to Uttarkashi

No. of gifts delivered in Uttarkashi - 1
Delivery Options for Uttarkashi 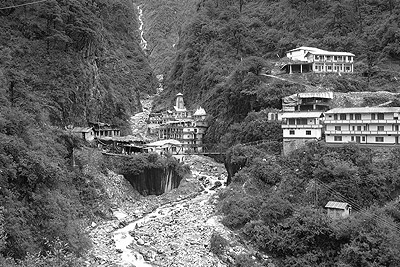 Uttarkashi, meaning Kashi of the north, is a town in Uttarakhand, India. It is the district headquarters of Uttarkashi district. Uttarkashi is situated on the banks of river Bhagirathi at an altitude of 1158 m above sea level. Uttarkashi is generally known as a holy town close to Rishikesh. It is located in the state of Uttarakhand in India. Uttarkashi is home to a number of ashrams and temples and also to the Nehru Institute of Mountaineering. The name of the town reflects its similarity to and location (as north of) the city of Kashi (Varanasi). Similar to Varanasi, town of Uttarkashi is situated on the Ganges, lies next to a hill named Varunavat, on confluence of two rivers Varuna and Asi, has a ghat called Manikarnika Ghat and has a temple dedicated to Shiva (Kashi Vishwanath Temple) in the center of the town.
Source :Wikipedia