Why use us to send Gifts to Tiruvannamalai 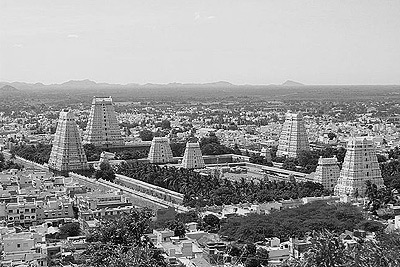 Tiruvannamalai, also Thiruvannamalai or Trinomali and Trinomalee (during British times) is a town in the Indian state of Tamil Nadu and a part of the Tondaimandalam (Tondai Nadu) region. The city is administered by a special grade municipality that covers an area of 13.64 km2 (5.27 sq mi). It is the administrative headquarters of Tiruvannamalai District. Roadways are the major mode of transport in Tiruvannamalai, while the town also has rail connectivity. Chennai International Airport is the nearest domestic and international airport to the town. Tiruvannamalai is named after the central deity of the Annamalaiyar Temple, Annamalaiyar. The Karthigai Deepam festival is celebrated during the day of the full moon between November and December, and a huge beacon is lit atop the Annamalai hill. The event is witnessed by three million pilgrims. On the day preceding each full moon, pilgrims circumnavigate the temple base and the Annamalai hills in a worship called Girivalam, a practice carried out by one million pilgrims yearly.