Why use us to send Gifts to Karad

No. of gifts delivered in Karad - 15
Delivery Options for Karad 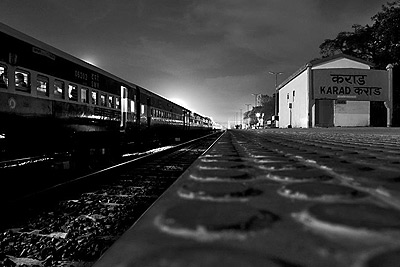 Karad is a city in Satara district in the southern part of Indian state of Maharashtra and it is 290 km (180.19 miles) from Mumbai and 159 km from Pune. It lies at the confluence of Koyna River and the Krishna River. The two rivers originate at Mahabaleshwar, which is around 100 km from Karad. They diverge at their origin, and travel for about the same distance to meet again in Karad. The rivers meet exactly head on, thus forming letter "T" which is the only head on confluence in the world. Hence Krishna and Koyna river's confluence is called Preeti Sangam, meaning Confluence of Love. Karad is well known for sugar production and is known as the sugar bowl of Maharashtra owing to the presence of many sugar factories in and around Karad. It is considered as an important educational hub in Western Maharashtra due to the presence of many prestigious educational institutes. This place is also known for resting place or (Samadhi) of the first chief minister of Maharashtra Shri. Yashwantrao Chavan situated at the confluence of Krishna and Koyana river. Vaang river is one of the sub river of koyna river.

These PIN Codes are those where we can arrange delivery of Gifts to Karad .
"HD" represents "Hand Delivery". For these PIN codes, delivery will be done by hand on the date you choose.
"CD" refers to "Courier Delivery". For these PIN codes, the gifts will be shipped through our shipping partners & will be delivered during the range of dates selected by you.

Can flowers be delivered same day in Karad?

Looking forward to greet or wish your dear ones in Karad with a beautiful bouquet of flowers? GiftstoIndia24x7.com lets you order the freshest and the brightest blooms from anywhere in India or abroad and delivers them to your friends and family in Karad within 24 hours of placing the order. The same day delivery service lets you place orders even at the last minute without having to worry about your gift not reaching your loved ones on time.