Why use us to send Gifts to Gaya

No. of gifts delivered in Gaya - 39
Delivery Options for Gaya 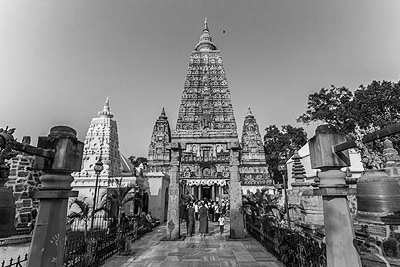 Gaya is of historical significance and is one of the major tourist attractions of the state of Bihar. Gaya is 100 kilometres (62 mi) south of Patna, the capital city of Bihar. It is the state's second-largest city, with a population of 470,839, and is the headquarters of Gaya district and Magadh division. The city is surrounded on three sides by small, rocky hills (Mangla-Gauri, Shringa-Sthan, Ram-Shila, and Brahmayoni), with the Phalgu River on its fourth (eastern) side.

Gaya is sanctified in the Jain, Hindu, and Buddhist religions. Gaya district is mentioned in the great epics, the Ramayana and the Mahabharata. It is the place where Rama, with Sita and Lakshmana, came to offer pind-daan for their father, Dasharath, and continues to be a major Hindu pilgrimage site for the pind-daan ritual. Bodh Gaya, where the Buddha is said to have reached enlightenment, is one of the four holy sites of Buddhism. The Mahabodhi Temple complex at Bodh Gaya is a World Heritage site.

These PIN Codes are those where we can arrange delivery of Gifts to Gaya .
"HD" represents "Hand Delivery". For these PIN codes, delivery will be done by hand on the date you choose.
"CD" refers to "Courier Delivery". For these PIN codes, the gifts will be shipped through our shipping partners & will be delivered during the range of dates selected by you.