Why use us to send Gifts to Dandi

No. of gifts delivered in Gujarat - 30059
Delivery Options for 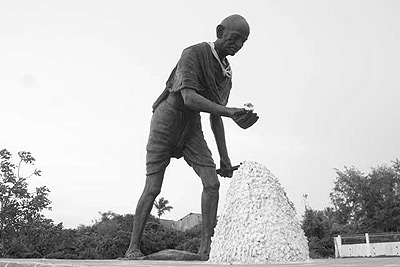 Dandi is a village in the Jalalpore taluka, Navsari District, Gujarat, India. It is located on the coast of the Arabian Sea near the city of Navsari.
It shot into worldwide prominence in 1930 when Mahatma Gandhi selected it to be the destination for the Salt March. He marched from Sabarmati (Ahmedabad) to Dandi with some of his followers to protest against the imposition of a tax on salt. Thousands of people participated, travelling on foot for 24 days from Ahmedabad to Dandi.
The Government of India initiated plans to develop the Sabarmati-Dandi stretch as a tourist hub. The government also proposed building a memorial to commemorate the Salt March of the Indian Independence Movement.
Source :Wikipedia

These PIN Codes are those where we can arrange delivery of Gifts to Dandi .
"HD" represents "Hand Delivery". For these PIN codes, delivery will be done by hand on the date you choose.
"CD" refers to "Courier Delivery". For these PIN codes, the gifts will be shipped through our shipping partners & will be delivered during the range of dates selected by you.