Why use us to send Gifts to Barmer

No. of gifts delivered in Rajasthan - 3630
Delivery Options for 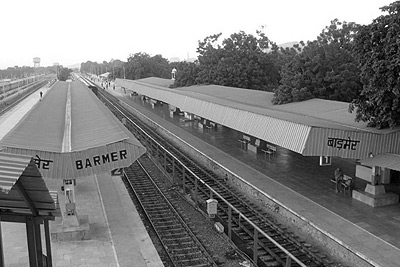 Barmer is the district headquarters of the Barmer district in the state of Rajasthan, India. It is a Group 'C' city for living standards, and the headquarters of the Barmer Taluka. In the 12th century this region was known as Mallani. Its present name was given by its founder Bahada Rao, popularly known as Bar Rao, Parmar Ruler (Juna Barmer) also known as Raja Dharnivrah of Naukoti Marwar, he had two sons named Rao Sodha and Rao Sankhla also known as "Shankh Kula", Sodha is derived from Sanskrit word Sodh" that means Brave and Powerful.

Once a camel trade route, this area is rich in craft that include wood carving, pottery, embroidery work and ajrak prints. Several festivals are held in Barmer, the most important being the Mallinath Cattle festival which is held at Tilwara village in remembrance of Rawal Mallinath who was founder of Mallani Pargana.