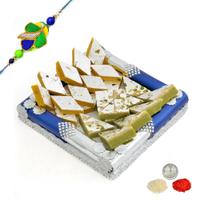 Asha from New Jersey, USA celebrated rakhi online with us. Send rakhi and rakhis to your brother in India.

It was good and fastest service.. thanks...!!

Raji from Telangana, India celebrated rakhi online with us. Send rakhi and rakhis to your brother in India.

‘Raksha Bandhan’ is one of the religious festivals celebrated by Indians with great devotion and spirit. This is because, it is celebrated to honour the sacred bond of love between brothers and sisters. The day begins by sisters praying for the well being of their brothers by tying a sacred thread, Rakhi,  on their wrist. The brothers, in return, vow to be with them in every step of their life. Once these rituals are done, gifts are exchanged between them to express their adoration and love. In regard to this, GiftstoIndia24x7.com offers a plethora of items which you can gift your siblings on Rakhi. The online

Among many festivals which are celebrated in India there are some which involves people of all caste and creed together. Like Christmas, though a festival celebrated by Christians but in India the spirit of Christmas touches all. As India presents Unity in diversity, we Indians have learnt to be a tolerant of all religions. There is no hesitation among us to participate in festivals of other religions too. Such a festival is Rakhi. Rakhi to India is such a festival which involves people of all ages, genders and religions. Rakhi is also known as “Raksha bandhan”  in India through GiftstoIndia24x7.com. The concep

Rakhi celebrates the most beautiful bond between a brother and a sister. It is extremely sad for a sister if she is living far from her brother, and can’t tie a Rakhi on her brother's wrist and pray for his long life. But with the help of modern day technology, you needn’t worry about it any more as you can send Rakhi to India online. Siblings living far away from each other might send their wishes through phone or email, but why just rest satisfied with wishing when you can send special Rakhis and Thalis to your brother. There are several websites available that can help you to deal with this matter and promise to

Send exclusive rakhi trays to your loved ones in India

With its eye on the impending Raksha Bandhan festival, Giftstoindia24x7.com announces the launch of exclusive Rakhi Trays that are going to make Rakhi celebrations even more special. These rakhi trays have been exclusively designed to cater to Rakhi festivities. The Rakhi trays will be delivered to the destinations across all cities in India. We have been delivering Rakhis gifts since 1999 . We have got the requisite expertise to send gifts to India. Raksha Bandhan is a popular festival of India when the customs require the sisters to tie Rakhi around the wrist of their brothers. The Rakhi is a symbol of togetherness and t

Raksha Bandhan is one of the popular festivals of India. ‘Raksha Bandhan’ means a ‘bond of protection’. The festival is commemorated by the siblings with great joy and pomp. On the day of the festival, sister ties a scared Rakhi thread on her brother’s wrist. It is believed that the thread has the power to protect the person from danger. Therefore, sister ties the thread to protect her brother from any hazard. Apart from tying Rakhi thread, sister performs ‘aarti’ of her brother and puts a ‘tilak’ on his forehead. She even prays to Almighty for his long and prosperous life.