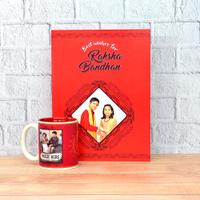 Please note:1. Upload the image on the product preview page or after making the payment on the order confirmation page.2. Send only high resolution image taken by at least 5 megapixel camera for clear image on the photo frame.

Gift Hampers for Sister and how they should use them

Rakhi is essentially about strengthening the sacred bond between a brother and a sister fostering brotherhood. Every year on Rakhi Day brothers and sisters corroborate their mutual love and affection for each other. Rakhi in India is a national festival, celebrated across the length and breadth of the country. It is a celebration of joy and happiness and like any other occasion, gifts play an integral part in it. So, if you know when is Rakhi then you can send gifts to your dear ones. Much before the auspicious day the market is abuzz with all kinds of gifts ranging from the eternal chocolates, perfumes, hampers to the mod

Its a small threadthat has traveled a long way.From pulling each others leg,to growing into best of friends....Today its paused,and yet another milestoneon the journey of friendship and love May this small thread bind us forever... Feasted with the love and enamor with care, every soul is ready to celebrate the sacred festival of Rakhi. The day which has become the cynosure of brotherhood, is celebrated around the world, with the rays of love and affection blooming in it. Rakhi festival is not only a ceremony of tying rakhi but it has moreover transited into the trust and love which a girl ties on her brother's wrist and hope t

Raksha Bandhan, the Hindu festival, is simply known as Rakhi or Rakhi Purnima in many parts of India. The festival is a celebration of the eternal bond of love between a brother and sister. The festival initially started as a celebration between siblings having blood relations but today a woman and a man, even though not siblings, can still take part in celebrating Raksha Bandhan. On this day, sisters tie a sacred thread around the wrists of their brothers. This thread is called ‘Rakhi’. Thereafter, the day on which this is tied, also came to be known as Rakhi. Since the traditional Hindu calendar is followed to det

Raksha Bandhan is a popular Hindu festival of India. The festival commemorates the eternal bond of love shared between brother and sister. Rakhi is usually celebrated on the full moon day of the Hindu month of Shravana. The festival brings all siblings as well as family members together. On this auspicious day sister ties sacred Rakhi thread on her brother’s wrist. She even prays for his happy and prosperous life. This ritual strengthens the bond of love between brother and sister. In return, the brother blesses her and enthralls her by presenting wonderful gifts. Everyone wishes to be with their dear ones on this grand f

Rakhi - the festival of brother-sister love

Since the very evolution of the human race, the mankind abides by one relation or the other. Among these human bondage, the relationship that is shared in between a brother and a sister is regarded to be one of the most cherished one. And it is the festival of Rakhi that celebrates this ethereal binding that is filled with a lot of emotions. Right from the Vedic times, Rakhi has acclaimed to possess a prominent posture among an Indian life. No matter wherever they are, an Indian woman always nurture a secret desire to send a beautiful rakhi for brother to India on this very day.   Right from our childhood, we share a sweet