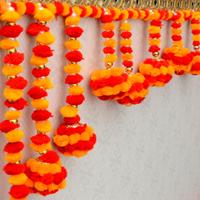 Pom Pom Bandarwals are trending thesedays. They make walls look charming. Made of red and yellor pom pom, this wall hanging would perfectly decorate the wall in time of festivals. Send this Pom Pom Bandarwal to your family and friends in India in time of an occasion or festival and let them brim with joy.

The festival of lights, Diwali, is a grand occasion that is celebrated all over India by each and every person. It is celebrated on the amavasya of the Hindu lunisolar month of Kartik and the entire festival takes place over a period of five days. Deepavali takes place on the third day while the festive season starts with Dhanteras and ends with Bhai Dooj. Sending gifts on this occasion is a very common ritual and various gifts to India online are sent from all over the world. India is a very diverse country and this is mainly seen in the celebration of the many festivals. Though Diwali is observed all over the country, the dif