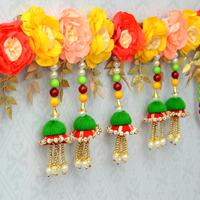 Bandarwals beautify interiors. They are visually appealing and thus a beautiful option as a gift. Send this Flower & Moti work Bandarwal to your family and friends when there is a festival in India. Let them decorate their walls and interiors with charming items like this flower and moti work Bandarwal.

What to gift your Mother-in-Law on Diwali?

Your mother-in-law is one of the most important persons in your spouse’s life. This is the reason she holds a special place in your life, too. If there are momentary rough edges in the relationship between you and your mother-in-law, then it would be proper for you to smoothen things out by sending her online Diwali gifts this year. The word “mother-in-law” becomes very interesting by the placement of two words “Mother” and “law”. Mother equates to affection and law is almost “complicated” and therefore this is a relationship that is laced with complicated affection. However