Being one of the most popular Hindu festival, Durga Puja is celebrated with enough pomp and pleasure all throughout India. Though the festival has its roots in the eastern parts of the country, today Durga Puja scripts a gala jubilation across the continents. It is celebrated annually in the Hindu calendar month of Ashwin and is a five day long festival, culminating in Dussera, or the tenth day. Being the most significant sociocultural event in Bengal, the festival of Durga puja in India leads to limitless fun, frolic and festivity. Modern traditions have come to include the display of highly decorated pandals(temporary structures set up to revere the goddess) and artistically depicted idols of Goddess Durga.

Durga Puja gained its prominence since the days of British Raj in Bengal. It is through the iconic observance of goddess Durga that these five day long period has remained to be as one of the largest celebrated festivals in the whole world. Feasting and gifting during this time of the year, therefore, is a very widely practiced phenomenon among the Indians. What Christmas is to the Christians, Eid is to the Muslims; Durga puja is to the Bengalis. Durga Puja in Bengal is more than just any mere festival; it is akin to that of a carnival. Irrespective of their backgrounds, regardless of their religious beliefs, people from every strata of the society participate and enjoy themselves to the hilt. It is through an entire year that the Bengalis save their fortune to enjoy during the pujas. Adorned in new attires, they flock together to hop through different pandals with an intense enthusiasm. A gala feasting and exchange of Durga puja gifts during this period of time is also commonly practiced by the Bengali populace.

Leave aside the Indian subcontinent, there is about 5,000,000 Bengalis today scattered all throughout the rest of the world. The desire of this Bengali diaspora, as settled in the US, Europe and Australia, has facilitated a lot in organising Durga Puja therein. Recently, the British Government also allowed the immersion of goddess Durga in the Thames, which speaks a lot about the strong foothold of this festival in a completely foreign land. In the United States the pujas are often hosted during weekends with very few exceptions. It is a time for the Bengali community there to gather together to savor the essence of their rich culture. Cultural programs are held with stalls selling ethnic clothes, jewellery, books, or music dvds. The whole atmosphere harmonises with a general mood of fun and amusement. Apart from enjoying the festivity of the occasion, these overseas candidates also wish to send gifts to India during this time of the year for their friends and relatives. 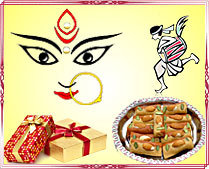 To enable an NRI to send puja gifts to India during this period, there are many online companies which have emerged hand in hand with the recent developments in the fields of computer and internet. Of these, GiftstoIndia24x7.com plays a pivotal role. To throw a light on some trendy e-gifting ideas as introduced by this gifting portal, the first that is sure to find an eminent mention herein, is none other but chocolates. You can always make your celebrations special by sending puja chocolates to India herewith. As it is a customary practice in India to convey puja greetings to one another with sweets, the second to suggest is, of course some exclusive sweet treats. Sending sweets to India during the pujas, therefore, will also be a nice idea to attest this festive mood. Then there are different types of other gifts in the likes of dry fruits, puja hampers, etc., that are innovative as well as alluring. Keeping in view the auspiciousness of the day, you can also send an exclusive collection of puja thalis for your friends and family in India during this Durga Puja.

Nowadays, to cope up with the recent career trends, many of us have to leave their home and abode to settle abroad. And the US, being one of the favorite overseas destination, Indians mostly reside there. Thus, with the help of GiftstoIndia24x7.com you can send gifts to India from US on this grand festival. E-gifting has become a global lingo to avid shoppers, mitigating the barriers of time and distance. With this recent development, now it has been a lot easier to send your Durga puja wishes to your loved ones settled anywhere in India. So, select and send your Durga puja gifts to your friends and family in India or to the USA, and let them feel your loving gesture. Since you already know when is Durag Puja, start your preparations right now, and make this festival an occasion to be cherished for an entire lifetime.

Customs and Rituals of Durga Puja