Why use us to send Gifts to Warangal

No. of gifts delivered in Warangal - 38
Delivery Options for Warangal 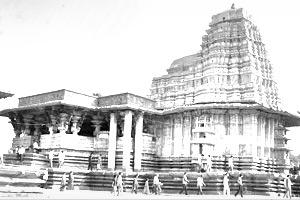 Warangal, earlier known as Orugallu, is situated in the state of Telangana and it is the second largest one there. It has a rich history and cultural heritage that makes it very popular among the many tourists who visit the state. Hot and dry climate can be found in this city that is a part of the prestigious and renowned Deccan plateau. Warangal is situated 990 ft above sea level and it is also being fast developed as one of the smart cities. Warangal is the second biggest city in Telangana after Hyderabad, spreading across 407.77 km (253 mi) with a population of 811,844. It is a city and the district headquarters of Warangal Urban District and Warangal Rural District's in the Indian state of Telangana. It is considered as one of the smartest cities of India.

These PIN Codes are those where we can arrange delivery in Warangal .
"HD" represents "Hand Delivery". For these PIN codes, delivery will be done by hand on the date you choose.
"CD" refers to "Courier Delivery". For these PIN codes, the gifts will be shipped through our shipping partners & will be delivered during the range of dates selected by you.