When is Guru Poornima

Of all the different festivals and occasions that form an integral part of the Indians, Guru Purnima is one of the most prominent ones. This festival, which is mainly

dedicated to the gurus, is celebrated every year on the full moon day in the month of ‘Asadh’ of the Hindu calendar.Gifts can be sent on this festival to express gratitude and also to honor the gurus or teachers. The articles in this chapter provide information on Guru Purnima and also about its history. Read More... 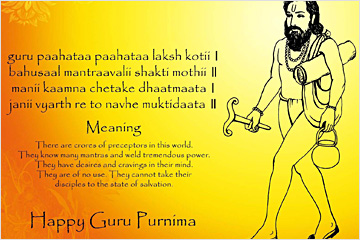 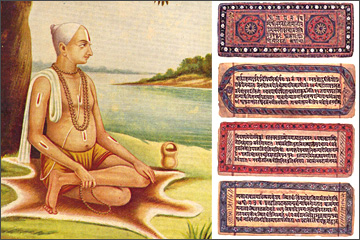 Guru Poornima 2015: Honour The One who Enlightens You

When was Guru Purnima in 2017? Guru Purnima is an auspicious festival, where one pays homage to the Guru and seeks their blessings. The word “Guru” itself signifies “ the elimination of Darkness” so in a true sense it can be considered that it is the guru who enlightens us with knowledge and frees us from the darkness. This occasion is mainly observed by Hindus, Jains and Buddhists on the auspicious full moon day of Shaka Samvat. This festival is observed every year based on the Hindu calendar. On this holy day, devotees and students commemorate and pay homage to their gurus and teachers, whom they thank

Guru Purnima is a special festival of India with a unique concept behind it. This auspicious festival takes place on the full moon day in the month of Asadh, which is dedicated to one’s mentor or guru. In some parts of the country, this festival is also known as Ved Vyasa Puja (named after Sage Ved Vyasa). It is also a special day for the Buddhists as on this day Gautama Buddha gave his first sermon in Sarnath. The idea of Guru cannot be defined in just words since they have the biggest contribution towards the progress in one’s life. The titles that are being offered to one’s guru might vary in different reli

Guru Purnima is an Indian festival that is celebrated to pay homage to one’s Guru or teacher. It is observed according to the Hindu calendar. This day mainly celebrates the tireless efforts and teachings of a guru, to direct one towards enlightenment. This festival was considered to be celebrated by the Buddhists to pay homage to Gautama Buddha, for his spiritual teachings. The Hindus celebrate Guru Purnima in relevance to Sage Vyasa, who is one of the knowledgeable teachers of ancient times. Guru Purnima is also known as Vyasa Purnima after Sage Vyasa, who was believed to be born on this day. The rituals of Guru Purnima

Guru Purnima is a holy occasion which holds its significance in commemoration to Sage Vyasa and is observed on the full moon day of the Hindu month, Ashad. Hindus acknowledge the greatness of this holy saint who was instrumental in the composition of some of the greatest scriptures like the Upanishads, 18 Puranas and Mahabharata. Sage Vyasa is considered as one of the great spiritual masters of all time and was believed to be born on this auspicious day, which is why “Guru Purnima” shares its name with Sage Vyasa and is also known by the name “Vyasa Purnima”. On this occasion, devotees worship Sage Vyasa