Holi is a auspicious festival in Indian calendar. Not only in India, it is also celebrated in Nepal and Pakistan with full gusto and fervor. Gifting constitutes a major

part of Holi celebration. So, you can elate your dear ones by sending amazing gifts. GiftstoIndia24x7.com has introduced a section that showcases a wide variety of Holi Gifts. With a cent percent potential to make your festival joyous and worth remembering for years, the site has introduced a separate section that showcases alluring Holi Gifts. One can choose from aromatic flowers, delectable cakes to stylish apparels, Holi hampers and spiritual items. The articles assigned in this chapter discusses exclusive gifting ideas that can make Holi celebrations memorable.  The articles assigned in this chapter will give you more information about Holi gift ideas you can send to your dear ones on this festival. Read More... 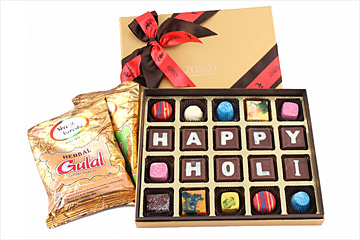 The festival of colours is quite near and everyone is busy in their preparations for this grand event. All the essentials that are required for Holi are being arranged by everyone along with the delicacies that are associated with this festival. This festival was originally a Hindu religious event but with time it has changed its perspective and has now become a secular one. Holi removes all kinds of barriers and divides that exist between people and paints everyone as multi coloured. If you are away from your friends and family during this time due to work or other reasons then you can easily send gifts for them online through

Known as the “Festival of Colours”, Holi is one of the most significant festivals celebrated in India. Observed on the full moon day of the month of Phalguna, it is regarded as the festival which commemorates the triumph of truth over evil. This robust carnival is celebrated with a lot of joy, elation and exuberance throughout the country. The occasion of Holi promotes communal harmony, trust and brotherhood within the society to strengthen our strong secular structure. This delightful festival is associated with playing with colours, gulaal, abeer and dissemination of sweets. This frolic amusement is enjoyed by eve

Holi is one of the important festivals of India. The festival is celebrated with great pomp and verve throughout the nation. It is observed on the full moon day in the Hindu month of Phalgun. The festival is known in various other names such as Spring Festival, Festival of Colors, Dol Jatra, Phagwah and Basantotsav. Though the celebration varies from state to state, the core essence of this festival remains same everywhere. Therefore, if you are wondering when is Holi in 2013, it is on 27th March. As the festival approaches, the shops get filled with heaps of colorful abeer & gulal and pichkaris. Everyone starts buying g

The Indian festival of Holi, is a celebration of colors. Like all the other Indian festivals, NRIs send gifts to India during the festival of Holi too. Sending gifts to India on special occasions and festivals have been made extremely easy by the online gift stores. There are many benefits in sending online gifts, and one of the major benefits is that, it saves a lot of time. Holi is one of the most prominent Indian festivals and if you are wondering, when is Holi in 2013 ? The answer is that, this year the festival of Holi will be celebrated on the 27th of March. There are various legends and stories associated with the col

Celebrate the Colorful festival of Holi with GiftstoIndia24x7.com

One of the predominant festivals of the Indians is Holi, which is commonly referred to as ‘festival of colors’. Other than India, this festival is grandly celebrated in countries like United States, United Kingdom, South Africa and more.  Indians living outside the country do not always get the chance to join their families back in India during the time of festivals.  In this case, the various online gifting stores help them to celebrate the different festivals by sending gifts to India. Moreover, before you send gifts to India on Holi, you must know when is Holi in 2012. Holi is on 8th March. If you a

Like all other Indian festivals and occasions, people celebrate Holi by gifting and exchanging sweets . As we know gifting is the integral part of all Indian festivals and occasions, people exchange Holi gifts on this day to make the day more colorful. To enable the customers to send gifts, many online gifting sites have come into existence. Amongst all, GiftstoIndia24x7.com is the premier online gifting portal facilitating the global Indians to send gifts to India on various occasions and festivals. On this upcoming occasion of Holi, GiftstoIndia24x7.com has arranged a wide range of gifting articles including Holi Gift Hampers

Popularly known as the ‘festival of colors’, Holi is celebrated on the last full moon day of the month of ‘Phalgun’, which stretches from the mid of February to the mid of March. Thus, if you are wondering when is Holi in 2012, then it is on 8th March.Counted among the principal of all Indian festivals, Holi is also known as ‘Dol Yatra’ and ‘Spring Festival’ or ‘Basant Utsav’. United States, Sri Lanka, Nepal, United Kingdom, South Africa are some of the countries where this colorful festival is celebrated by the people of the Indian community. Indians living outside th